With just three weeks to Election Day my campaign continues to gain momentum with the exciting announcement that the Editorial Board of the Daily Bruin has endorsed David Berger for as Judge of the Superior Court, Office No. 80. 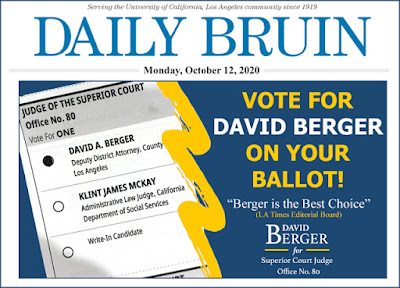 Explaining why the Daily Bruin endorsed me, they said:
“Yes” on David Berger for Superior Court of Los Angeles County, Office 80
David Berger has actively worked to put individuals through rehabilitation programs throughout his career.
The editorial board endorses Berger both for his dedication to rehabilitation over incarceration and his 24-year history with the district attorney’s office.
As an alternative sentencing designee for the district attorney’s office, Berger facilitated a process that helps people convicted of nonviolent crimes dismiss their cases. In partnership with Community Collaborative Courts, Berger helped develop a process to reintegrate people into their law-abiding lives with dismissed cases.
Klint McKay, Berger’s competitor, also has years of experience under his belt. While also held in high respect, the board finds McKay’s vague campaign priorities do not demonstrate the same dedication to the public interest as Berger’s.
Berger’s vision is clear: He hopes to use his appointment as judge to further rehabilitation efforts.
&tc.