I am delighted, immensely proud, and honored to announce that the Los Angeles Times has endorsed David Berger for Judge of the Superior Court, Office No. 80, saying I am "Smart, and respected by judges, defense lawyers and fellow prosecutors, Berger is the best of the three candidates for this seat." Thank you to the LA Times Editorial Board for trusting me with your endorsement.

For the 23 Judicial Candidates in the 2020 primary, the LA Times endorsed 9 after conducting extensive research and in-person interviews with all candidates. The Times Editorial Board explained their process saying “The process actually starts about two months before ballots are mailed, with the board inviting candidates to come in for interviews. Occasionally, a candidate will refuse to sit down with the board, but they’re all invited.” The full explanation of their endorsement process can be read at the LA Times by clicking here.

The LA Times Editorial Board concluded “Berger is the best choice,” a view shared by others who have exclusively endorsed me including the Metropolitan News-Enterprise, saying: "Los Angeles Deputy District Attorney David A. Berger looms as the outstanding contender in this race. He is highly articulate, skilled at analysis, composed, decisive, and knows what he’s doing.”

While the Times did not comment extensively on either of my opponents, the Met News did. As to Nick Rini the Met News said “his performance would fall short of Berger’s. One judge advises:“Nick Rini has a difficult personality, to be charitable. He is quick to anger, slow to cool off, and can be vindictive towards criminal defense attorneys. He appears to enjoy controlling others, keeping attorneys unnecessarily waiting for his attention. His advocacy/legal skills are questionable, rarely researching the law, and relying more on bombast and repetition than calm, sound legal reasoning.”

The Met News concluded “From what we have been able to ascertain, Berger enjoys respect among deputies in the Public Defender’s Office, being seen as fair, courteous, reasonable and ethical, while Rini is viewed as dishonest, unpleasant, lazy, and hot-headed.”

As to Klint McKay, the Met News seemed concerned by McKay’s record of “gaffes” and “blunders” when he initially ran against a newly appointed judge, did not appear to understand election law, and spoke on his website of seeking “appointment” by voters, rather than election. The Met News opined that if "McKay could not be careful pursuing his own interests, how can it be expected that he will be careful and attentive to the interests of others."

Given the analysis by the Met News, it is easy to see why they concluded “We wholeheartedly endorse Berger.” The full content of the Met News endorsement can be read by clicking here.

Neither the LA Times nor Met New endorsements had been published when the following organizations also exclusively endorsed me, but their reasoning was likely the same:
I am very proud of and honored by those endorsements as well as having the endorsement of 49 Los Angeles County Superior Court Judges, and other elected officials. The full list of those who have endorsed me can be found by clicking here.

These endorsements matter because they give voters independent, impartial, and unbiased information about me and, and helps to explain why so many people have concluded that Berger is the best choice for Judge of the Superior Court, Office No. 80.

Many supporters have been submitting photos of their Vote By Mail ballots and it's very encouraging to see and hear so much support for my candidacy. Just 3 weeks to election day, let's keep those votes coming! 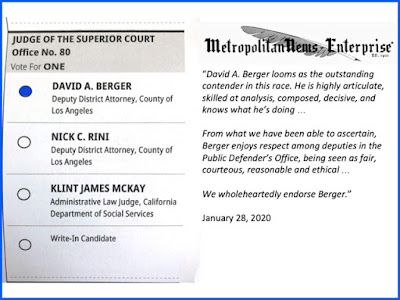 And "Thank You" to the editorial board at the Metropolitan News-Enterprise for their endorsement and thoughtful analysis of the candidates for Office No. 80.
No comments: